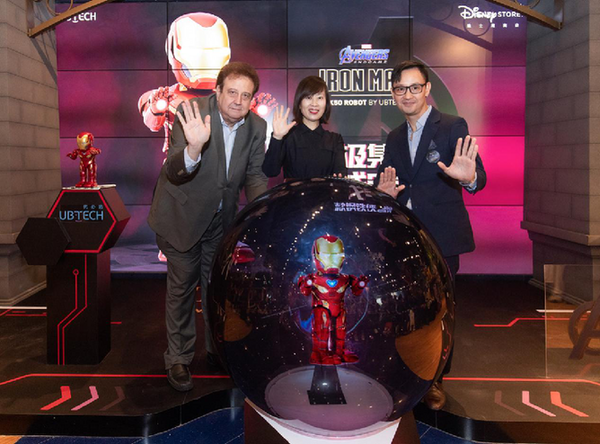 Ubisoft and Disney representatives jointly launched the Iron Man MARK50 robot Disney flagship store offline
At the online launch event, Ironyman MARK50 robot product owner Andy Rifkin talked about the development story behind Marvel's first Iron Man MARK50 intelligent robot. Marvel's loyal fan representatives also attended the event and shared their own Marvel's complex and the feeling of interacting with the Iron Man MARK50 robot.
The reason why You must choose Iron Man among many well-known figures in Disney is not only because he is the hero who created a new era of Marvel movie universe, but also because Tony Stark has no super power compared with other super heroes. But his cleverness and humor, as well as the weaknesses of ordinary people and the three-dimensional character personality, are more easily accessible by fans, which makes him a popular character on a global scale. In addition to the personal charm of the character itself, Iron Man's armor has always been loved by fans, and in appearance, it also fits well with the image of the humanoid robot.
At the beginning of R&D, Ubuntu wanted to let Iron Man enter the life of fans from the screen, use technology to give life to the derivatives of Marvel movie characters, and create a deep immersive and highly customized experience. Fans can use this robot to realize the dream of “transforming” Iron Man.
In order to create a deep immersive experience, the Ubisoft and Marvel team spent nearly a year on product development, and achieved a great degree of role restoration based on respect for the characters. The most innovative and intuitive feature of this product is the opening and closing of the LCD screen. When the robot's mask is opened, you can see Tony Stark's face. Users can also upload their own facial videos or voices, "transformed" Iron Man.
As a Marvel series character robot, the story scene is also well extended on this product. The Iron Man MARK50 robot introduced Tony Stark's artificial intelligence assistant F.R.I.D.A.Y. as the guide of the APP, and designed an interesting dialogue that fits the character's personality, allowing the user to feel a lively iron man in the process of interacting with the robot. At the same time, AR games joined the classic villain fighters in the "Avengers" series. The ultimate level of the game also has the challenge of killing the tyrant. The product team specially made the special effects of the tyrant, which made him closer to the movie story. Being able to play against the ultimate villain of the Marvel universe in the AR scene will be an exciting experience for the user.
In terms of creating a highly customized experience, the Iron Man MARK50 robot has a custom programming mode and is equipped with multiple sensors, allowing users to interact with the robot more personally away from the APP. 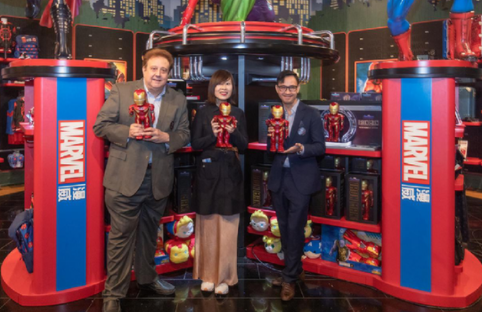 The picture shows the Iron Man MARK50 robot stationed in the Disney flagship store
From the perspective of industrial design, in order to create a high-tech sense of the Iron Man's armor face opening and closing, and the stunning feeling when the eyes are lit up, the lights of the Iron Man MARK50 robot's eyes are hidden, the mask and the face are in the gap. The contact LED light design is added, and the LED light is completely hidden. Once the mask is closed, the light will automatically turn on, and the mask will automatically close when it is opened.
The foot design of the humanoid robot is the most difficult part, the foot needs to carry the weight of the entire robot, and the center of gravity of the robot needs to be kept on a reasonable axis. To this end, the Iron Man MARK50 robot uses the method of double-foot battery and metal plate weight in the structural design process, and adopts the method of curved surface design and hidden chamfer design. In order to further ensure the degree of reduction of the product, the knee and elbow joints of the robot are not too bloated due to the increase of the motor. The motor and multi-layer gear linkage mechanical design is adopted in the shoulder and the ankle to ensure the maximum action. Richness.
The Iron Man MARK50 robot soon gained widespread attention from consumers. Previously, this product has been pre-sold in Jingdong, with a retail price of 1965 yuan.
Starting from April 26th, this product will be officially launched in online and offline channels including Jingdong and Disney Store. From May onwards, the products will be stationed in the national specialty stores and other consumer electronics terminal stores. In addition, consumers will have the opportunity to find the Iron Man MARK50 robot in Wanda Cinemas in more than ten cities including Beijing, Shanghai, Guangzhou and Shenzhen.